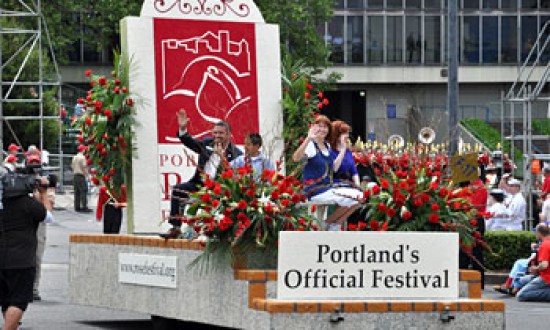 The 17 Best Festivals in Portland, Oregon

Portland has a reputation as one of the premier counter-culture, art, and music hubs of today, so it’s no surprise that Oregon’s largest city is home to some of the best festivals and concerts you will find anywhere.  While “festival season” truly kicks off in the summer months, there are plenty of events year round in the Portland area to keep Rose City residents entertained.  Here’s a look at 17 of the best festivals and concerts in Portland that you shouldn’t miss.

With so much water flowing through town, thanks to the Willamette River, it’s no surprise that Portland has a rich boating tradition.  Every year, you can see some of the most impressive, historical, and glamorous boats in the area at the indoor Portland Boat Show.  This is a great family friendly festival with a moderate ticket price, and it’s a unique way to learn more about Portland’s historic relationship with the Willamette.

Oregon has become a center for craft brewing, small wine making, and other artisanal food and drink craftsmanship, and the First Taste Oregon festival celebrates this blossoming food heritage by bringing some of the best flavors from all over the state to Portland at the start of the year.  In addition to incredible eats, First Taste Oregon features two stages of live music provided by Oregon-based acts.

If you can’t find enough decadent food at First Taste Oregon, check out Chocolate Fest, which comes to town the same weekend.  Chocolate Fest is the largest chocolate exposition in the North West, and heavily features artisanal, handmade chocolates crafted with local ingredients.  Besides sampling delicious treats, you can visit this festival to learn more about how chocolate is made, how the cacao tree is harvested and cultivated, and how the production of chocolate has evolved.

Nothing goes better with rainy weather than live Jazz music, and if you visit Portland in mid to late February, expect to find lots of both.  Portland’s take on a Jazz festival puts local acts on stage next to internationally known Jazz powerhouses, with more than a week of music hosted at multiple venues around the city.  Come for the music, but stay for the history, Jazz education and outreach programs, and devotion to Jazz culture.

Portland is home to one of the largest, longest running, and most expansive Shakespeare celebrations in the Oregon Shakespeare Festival, which hosts multiple plays at three stages for eight months of the year.  Plays are often presented in the historical, classic tradition, but don’t be surprised if a little Portland flair and “weirdness” finds its way onto the stage.  Check the festival’s calendar to see which shows play when.

While Ashland is somewhat of a long drive or train ride from Portland, every year, many PDX natives head south on the 5 to catch Ashland’s infamous Independent Film Festival.  One of only twenty film festivals in the U.S. and the only in the Northwest to receive a prestigious grant from The Academy of Motion Picture Arts and Sciences, the Ashland Independent Film Festival attracts submissions from all over the globe.  Yes, Ashland isn’t Portland, but this festival fits in with PDX culture so well that we had to include it on this list.

Much ado has been made about the “Americanization” of Cinco de Mayo, but Portland likes to do things differently.  The annual Cinco de Mayo celebration held in PDX is populated by culturally accurate Folklorico music, food, dancing, and art, all of which provides an educational spin to what’s known as a “party holiday.”  Of course, for everyone twenty-one and over, there’s plenty of the usual Americanized Cinco de Mayo depravity to go around.

The Columbia Gorge is a short drive from Portland, which means that the world famous Sasquatch Music Festival deserves a place on this list.  If you are looking for a large, outdoor, camping based, huge music festival with international acclaim and the headliners to match, Sasquatch is probably your best bet on this list.  Longtime fans have complained in recent years that Sasquatch ticket prices are becoming unreasonable, but remember that we are talking about one of the best known festivals globally and certainly one of the most notorious in the Pacific Northwest.

With a nickname like “The Rose City,” it’s no surprise that Portland has a sincere devotion to celebrating floral excellence.  While the Portland Rose Festival officially kicks off in April, the largest events of the festival, including music and parades, is held during the first full week of June.  Expect to see and smell some of the most beautiful flowers in the world.  If you are brave enough to try rose chocolate or wine, you can taste the “rose” part of the Rose City too!

While Astoria is a couple hours drive from Portland, every year many PDX natives make the journey in mid June for one of the most unique and exciting festivals in the state, the Astoria Scandinavian Midsummer Festival.  All events highlight the cultural history of Scandinavian people, but the exact events differ from year to year.  Some perennial favorites include a “Miss Scandinavia” competition and an enigmatic “Troll Run” that you need to experience to understand.

While concert dates and headliners change from year to year, the production quality and community feel of the Edgefield Concerts on the Lawn series remains a PDX favorite every summer.  The only announced headliner for this year is Josh Groban, who will be playing in August, but you can expect a wide variety of big name acts.  Plus, the “Lawn” can’t be matched for a venue if you value a community feel.

Every July, Portland hosts the second largest blues festival in the country in the form of the Waterfront Blues Festival, which reliably draws international headliners from all over the globe.  In addition to great Jazz and Blues music, the Waterfront Blues Festival is known for its amazing food.  Plus, this event is a fundraiser for the Oregon Food Bank, and attendants are encouraged to get involved with the well known non-profit.

PDX Pop Now markets itself as a family friendly festival for all ages, but that doesn’t mean that the annual free series isn’t packed with high energy fun.  Bands are selected from all over the world, though half of the acts must be from Portland every year according to the festival’s charter.  If you are looking for a multi-stage festival with some big name acts, there’s no cheaper option during Summer in Portland than PDX Pop Now.

This three day music festival features “roots” music from all around the world, with a small emphasis on Americana, Folk, and Bluegrass.  Acts of all different types perform on six stages, and in typical Portland style, Pickathon is known for amazing local eats as well as music.  Three unique beer gardens are off-balanced by a variety of children friendly activities.  For true stringed music enthusiasts, many of the acts host musical workshops throughout the year.

Not many cities host a historical re-enactment/ mostly accurate pirate plundering/ “conquest” chaos event like Pirate Festival, but not many cities are like Portland.  Every year, this unique and quirky festival finds participants dressing like pirates, tall ship tours, pirate themed re-enactments and events.  Of course, where there are pirates, there is an abundance of food, beer, and nautical music as well, and you can find all in abundance at this unique festival.

What started as a small alternative festival is now one of the largest and most “mainstream” music celebrations in the region, and MusicFestNW can always be counted on to bring some unique and big headliners to town.  The schedule for 2016 hasn’t been announced yet, but last year was headlined by Foster the People and Modest Mouse, so you can expect some big names.  Ticket prices do reflect these powerhouse headliners, but if you don’t mind spending a bit for a great festival experience, MusicFestNW is one of the biggest and most energetic in PDX city limits.

The Pearl District has quickly become celebrated as one of the most important hubs for local art in a city known for local artisans, and every year, this artistic energy is celebrated on Labour Day weekend with the Art in the Pearl Festival.  More than a hundred local artists displaying and selling their work forms the backbone of this festival, but you can find a lot more at Art in the Pearl, from great food to local music at the Singer/Songwriter Stage.